The first British settlers of Maspeth were driven out by angry Native Americans and eventually moved further east, where Queens Blvd. meets Broadway today. Eventually, the name Newtown was applied to what was then a new city. By the mid-1800s, horse-drawn carriages and eventually streetcars brought people from all over, and when Cord Meyer developed the area in the 1890s, he lobbied for an upper class name … Elmhurst. Oddly enough, the IND subway, which arrived in 1936, keeps the Newtown name at one station, and Newtown High School retains the old nickname, as do a pair of roads in Astoria that were once the main arteries to the city.

Whitney Ave. runs from Queens’s Broadway and meets the Long Island Railroad in the northeast to Roosevelt Ave. where Elevation # 7 rumbles overhead. The core of Elmhurst has a checkerboard street grid arranged across the overall north-south grid found elsewhere in western Queens, and its streets are permitted to retain their names instead of the numbers found elsewhere in most of the ‘arrondissement. They were originally numbered, but by 1915 they had names in alphabetical order, from Aske to Macnish, which can commemorate the first developers or investors. The avenues are named after Whitney, Lamont, Britton and Baxter, again probably owners or developers of family properties, along with Elmhurst Avenue. Whitney Ave. may or may not have something to do with financier William C. Whitney (1841-1904), who built a mansion near Marine Park, Brooklyn and used his property to train and breed thoroughbred racehorses. The first owner of the New York Mets, Joan Whitney Payson (1903-1975), was his granddaughter; the Whitney family tentacles can be spotted in Inwood, Manhattan and Sheepshead Bay, Brooklyn, so why not Elmhurst?

One of Elmhurst’s gems is the Elmhurst Baptist Church on the cobbled exterior of Whitney and Judge. The first stone was laid in 1902, and the church was completed the following year. Burmese and Indonesian Baptist services are offered here, as well as an apostolic worshiping congregation in Spanish. The church was designed by architect AF Leicht, with original plans calling for a stone building with an octagonal interior and a concave ceiling finished in hardwood with a capacity of 500 seats.

A short distance on Whitney, this brick building is home to a Chinese-dominated congregation with services in English and Mandarin. The building may originally have been a synagogue, as the word Mizpah (watchtower) once appeared above the front door, but there is an equal chance that a Protestant congregation will meet here. 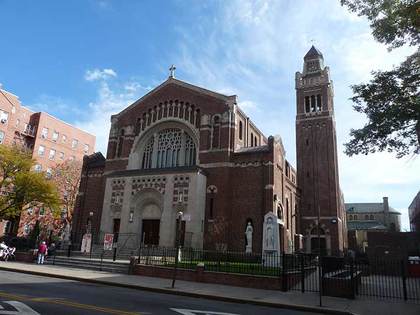 One block on Ithaca St. and Whitney is Elmhurst’s largest Catholic Church, St. Bartholomew’s, which is not as famous as its namesake Park Avenue. The Great Italian Church was built in the 1930s (as with many churches the information online is sketchy; it is a magnificent building nonetheless and you hope better building records are readily available). The parish was established in 1906 and the original church still stands, in the middle of Ithaca between Whitney and 43e Aves. 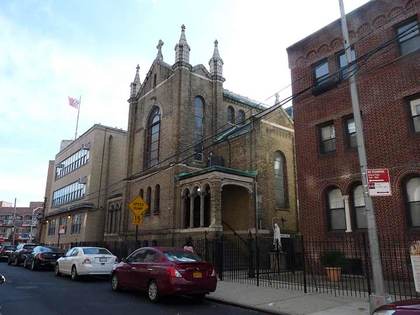 A walk on Ithaca between Whitney and 43rd Ave. reveals the old Saint-Barthélemy church, built in 1910 (the cornerstones indicate the date of the founding of the parish, as well as the date of completion). Ithaca St. was still 4th St. when the church opened in 1911. The building is now called Heafy Hall, after the original pastor Jeremiah Heafy (the sign on the building spells it wrong as Heafey). Notice the finely worked sandstone; according to the article, the stained glass windows were imported from Munich.

Saint Bartholomew, one of the original 12 apostles, is the least known – there is no biblical story associated with him and he is not cited at all – although he was associated with another apostle, Saint Philip. All the stories about him come from the apocrypha and the Christian tradition. According to this, he was martyred for converting an Armenian king, and was flayed alive and then beheaded. Consequently, numerous representations of him in statuary show him holding a flaying knife. 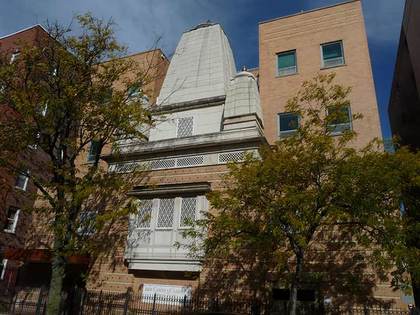 Also on Ithaca St. is the Jain Center of Elmhurst. From the builder SEN Architects: Jain Center in Elmhurst is a four story structure, with two religious temples, a meeting room, a library, meditation rooms, exhibition halls and classrooms for activities centered on the youth. It meets the social and religious requirements of the Jain community in Queens. Jainism is an ancient faith, originating in India in the 6e Century Before Common Era as an offshoot of Hinduism. The Jain religion teaches salvation by perfection through successive lifetimes and the uninjury of living creatures, and is known for its ascetics. Buffy Sainte-Marie mentions it in her song “Universal Soldier”.

—Kevin Walsh is the webmaster of the award-winning Forgotten NY website and author of the books Forgotten New York (HarperCollins, 2006) and also, with the Greater Astoria Historical Society, Forgotten queens (Arcadia, 2013)