Raised in a black apostolic church in the southern suburbs of Chicago, Thirus was active in the youth group at her non-denominational church and was home educated until she was 14. Today, she is a black Christian feminist who often feels caught between what she sees as misogyny, homophobia and church racism on the one hand and “religion-bashing” and whiteness. many feminist spaces.

“It’s something that definitely inspired me to make this movie,” Thirus said. “I did it for the anomalies, for those who are against patriarchy and misogyny, but also have a heart for God and look at their faith from a non-oppressive perspective.”

Filmed at the Epiphany Center for the Arts in Chicago, his hour-long mixed media documentary features music and dance amid interviews with pastors, evangelists, therapists and academics. These experts discuss everything from the feminism of Jesus to sexual violence in the church.

Thirus’s previous documentary “Unlearning Sex” won the Toronto International Women’s Film Festival in 2020, and her film “Black Feminist” won the Jury Prize at the International Black and Diversity Film Festival for Best American Documentary in 2021. Screenings for “Daughters of Eve,” created for viewing in churches and theological schools, can be requested on the film’s website.

Religion News Service spoke to Thirus about the inspiration for the documentary and the possibilities of non-patriarchal Christianity. This interview has been edited for length and clarity.

What kind of messages have you received upon hearing about what it means to be a Christian woman?

Purity, I think, was the most important thing. I was constantly preached to keep myself for marriage, whether sex would lead to pregnancy, STDs, or hell. But we didn’t have sex education either. So it was like, what is sex really? My first experience of sharing my body with someone was assault, and I had no idea.

It took years to get through that, to learn more about consent and trauma. I had to unlearn everything I had been taught about sex, and a lot of it started with who my body was, and ideas about sin and purity.

The filmmaker Zanah Thirus in “Daughters of Eve”. Courtesy photo

It is a very common story for women in the church. We are taught what not to do, but we are not really taught autonomy or given the space to understand that sexual pleasure is a good thing.

Why did you name your film “Daughters of Eve”?

My mother would always read the Bible to us, and we would talk about Cain and Abel, and I was like, where are the girls? I began to understand this woman’s lack of agency. I hated Esther’s story – she never asked for any of these. Or Bathsheba. Why did David have access to her this way?

So my thought was, if Eve had daughters, what would their experience be like? What if this story was told, since the dawn of time, as centered on women?

This film critiques the account that Eve is responsible for the fall of creation. Why are the stories we tell about Eve important?

Eve is the first story in the Bible about a woman. It is the basis of how so many Christians center their beliefs in the purpose and identity of women. There is so much notion that Eve was created for Adam, that women are created for men, and from a man. The idea that all women are for men and that our purpose is rooted in men is very limited to what I think God’s overall intention is.

The way I like to look at her is that the earth was not complete without Eve. In the film, we talk about domination and submission, words that are often taken out of context. But she was the jewel of creation and life could not go on without her. The punishment of Adam ruling over her and having painful children was never the original intention, but a punishment for disobedience.

The documentary deals with disturbing stories of sexual violence. How do you think Christians should interpret these stories?

First and foremost, pastors and all leaders are responsible for the care of their congregation. I think it’s very irresponsible to say, just dive into the Word of God. It is a book that can be very triggering and can cause damage if people are not given the proper tools. 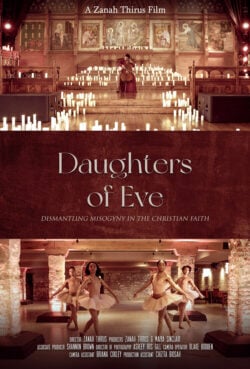 Pastors need to be made aware of the potential traumas their congregations have faced. Churches are filled with survivors of some kind of sexual violence. You don’t know how you could trigger it. Claire Horner, one of the film’s toxic religion therapists, talks about the importance of pastors being trained in sexual violence or having a consultant for their sermons. It’s OK to start the sermons with a trigger warning.

What should lay people do with sexual violence in the Bible? Is knowledge of the historical context sufficient to explain it?

The point is that at the time women were property. They literally belonged to their husbands and fathers. It is a harsh reality, but anyone who reads the Scriptures and wants to dismantle misogyny must understand this.

RELATED: Women Are Essential in the Bible. Now they are in the Sunday readings

Often times the Bible doesn’t tell you what’s right or wrong, it tells you what happened. It’s telling a story. Just because a man sold two girls, it doesn’t tell you it’s the right thing to do, it tells you what happened. People will take stories and make them relevant today in a harmful and violent way. It is helpful to look at the Bible for inspiration on how people survived, or how God manifested himself in these scenarios, without necessarily considering the things people do as law.

Would you say that the Bible is ultimately a liberating text for women?

It is possible, but as a survivor of sexual violence and as a person who grew up in a very misogynistic church and religion, I have found my self-reliance through research and understanding outside of what my pastor or church leaders told me to believe. I think people are very imperfect, and I think patriarchy is the result of power. It is a system in place to maintain the power of men, but it is not ordered by God. It never has been. Looking at Christianity through this lens, that’s when I discovered that my faith was liberating.

“What you are feeling is not wrong.” I was livid when I heard misogynistic sermons, even before I had the terms feminism, misogyny, feminism or autonomy. I didn’t have the tools I have now, but there was something so infuriating about hearing sermons about women being in their shoes, or about submission. I would tell my young self that the rage is right. The way these things are preached is not the way God intended it to be.

As Christmas approaches, do you have any advice on how Christians can dismantle misogyny in their churches as they reflect on the birth of Christ?

Remember that Christ, the Savior of the world, came to this world without the help of a man. Additionally, Mary was an unmarried teenage mother who was not white. So let’s think about how God chose to show himself and what we’re really celebrating.