Mangaluru, August 24: The day of Altar Servers and the Marian Congregation was celebrated with grandeur and reverence on August 21 under the able leadership of Father Anil D Mello, Pastor of the Commission for Vocations and Formation.

The celebration began with a mass celebrated by Father Joswin D’Souza, professor of philosophy at the Saint Joseph Interdiocesan Seminary in Mangaluru and Father Anil D’Mello, parish priest. The entrance procession made its way symbolizing this journey – from the world outside the doors at the back of the church, to our heavenly destination, symbolized by the sanctuary at the front of the church with the servants altar all invested for the occasion and the members of Sodality holding a rose in their hands symbolizing true love and passion, scented in a varied range of colors, was arranged in the pot. 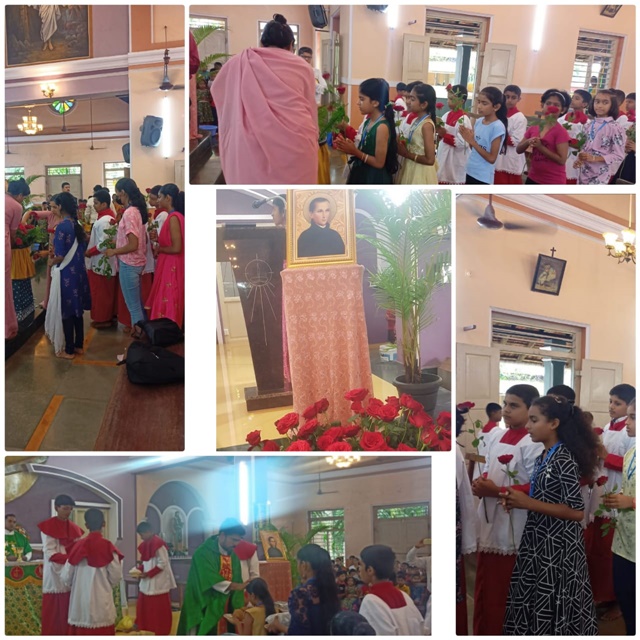 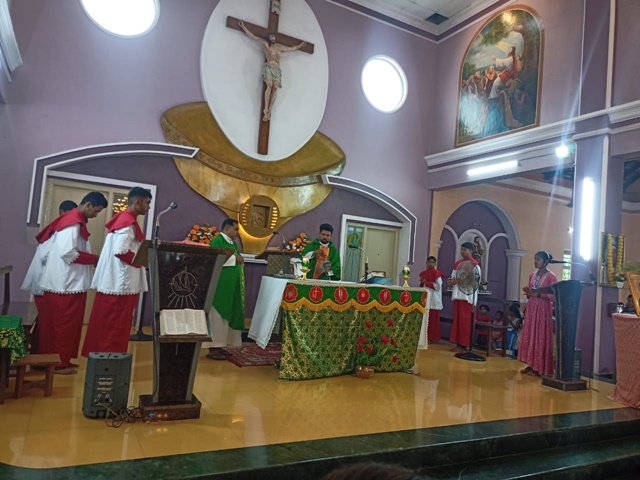 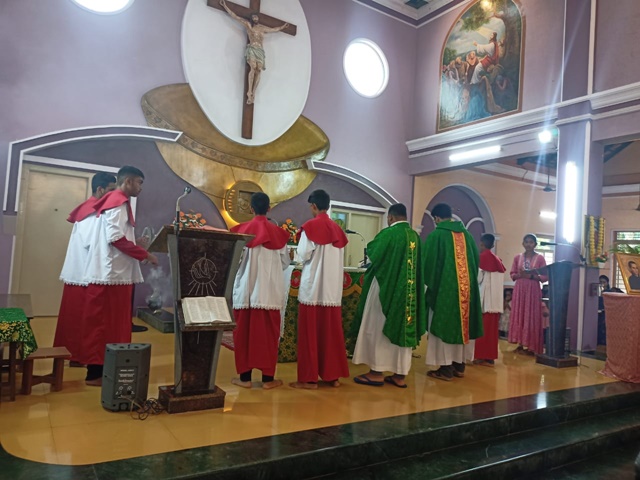 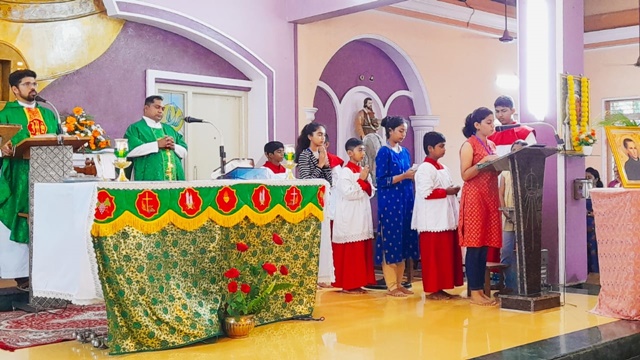 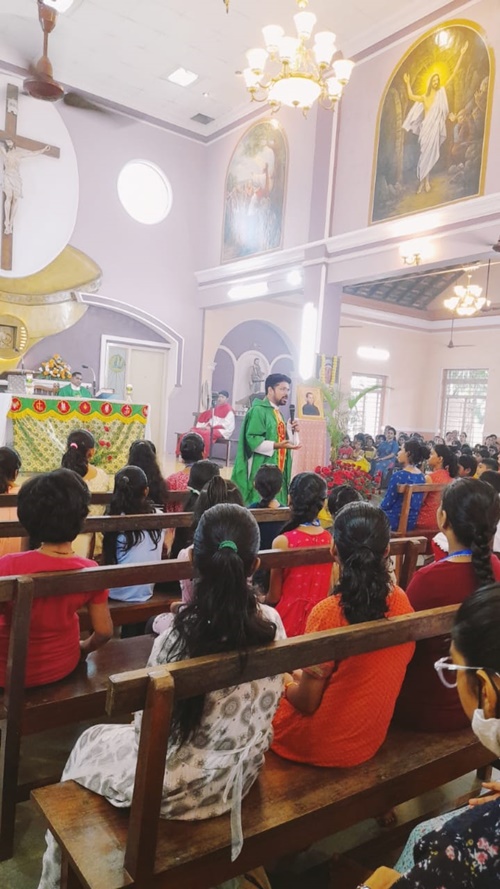 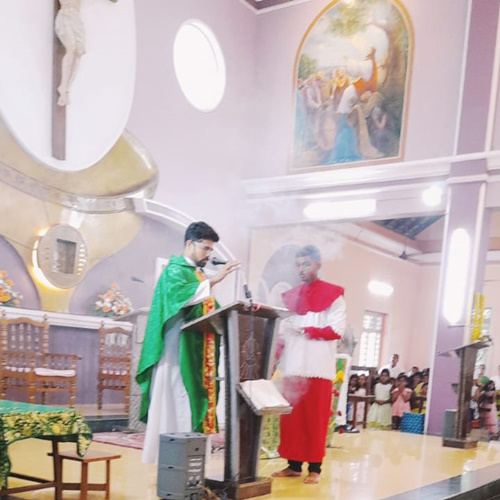 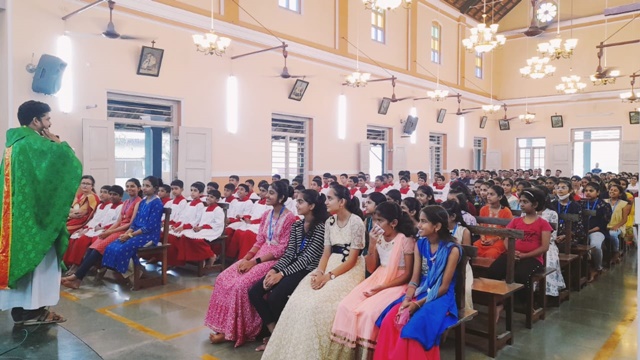 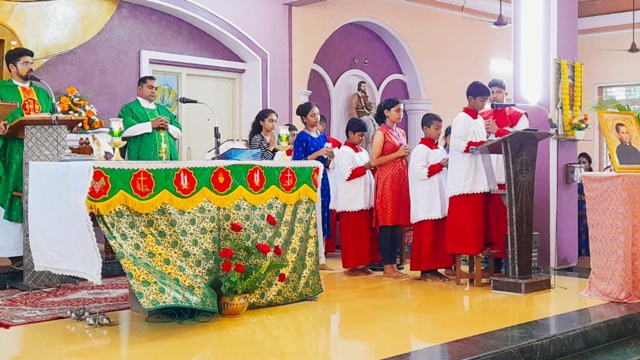 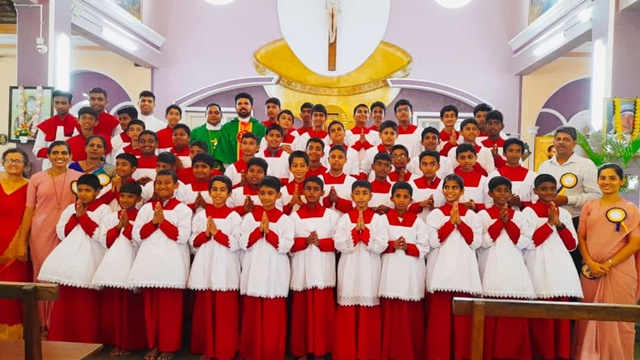 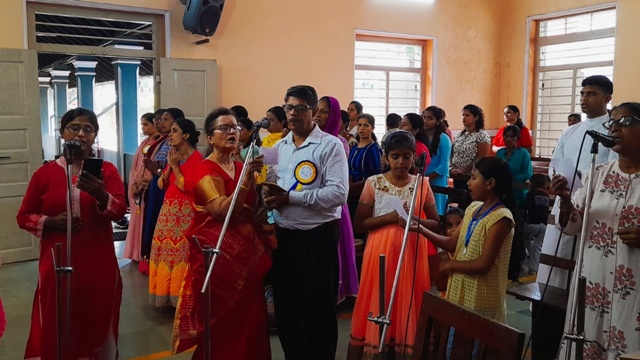 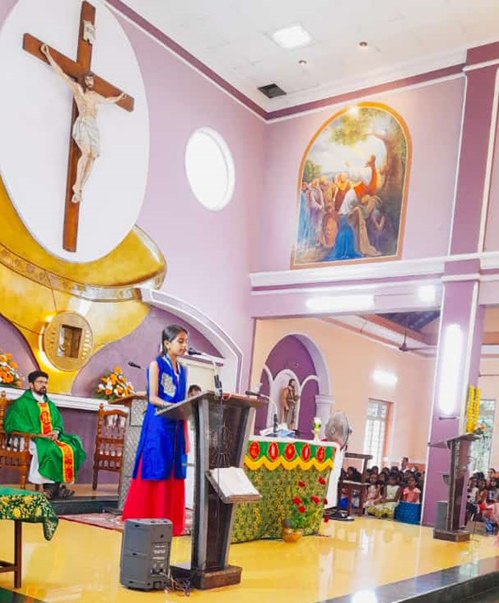 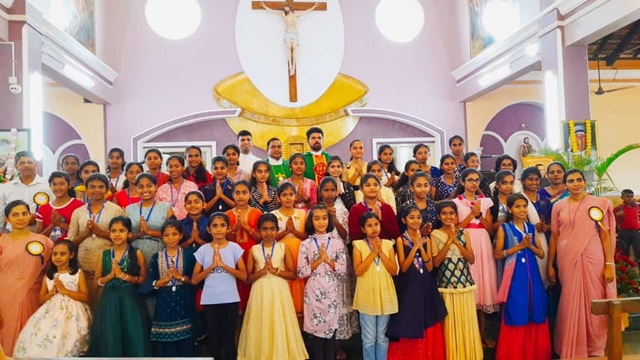 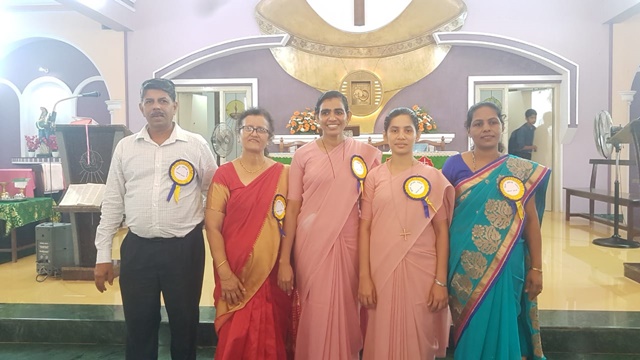 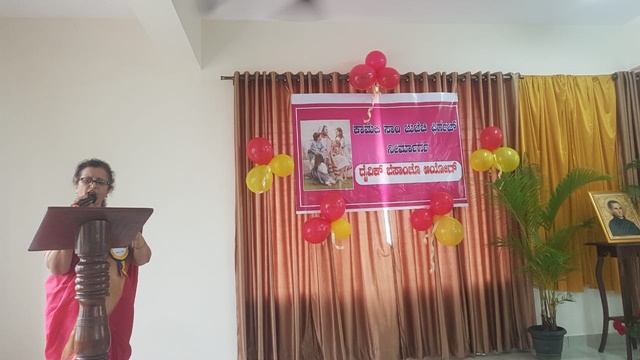 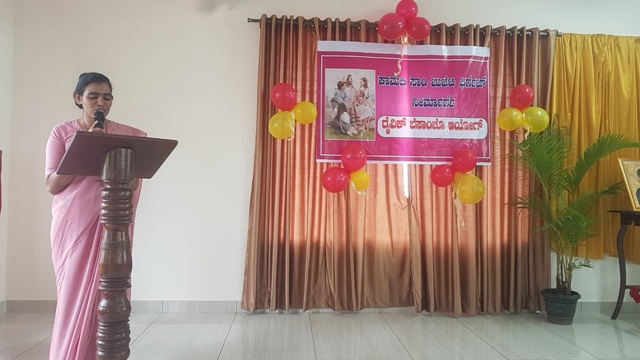 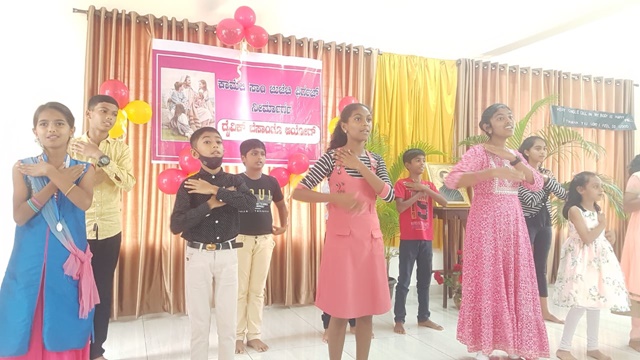 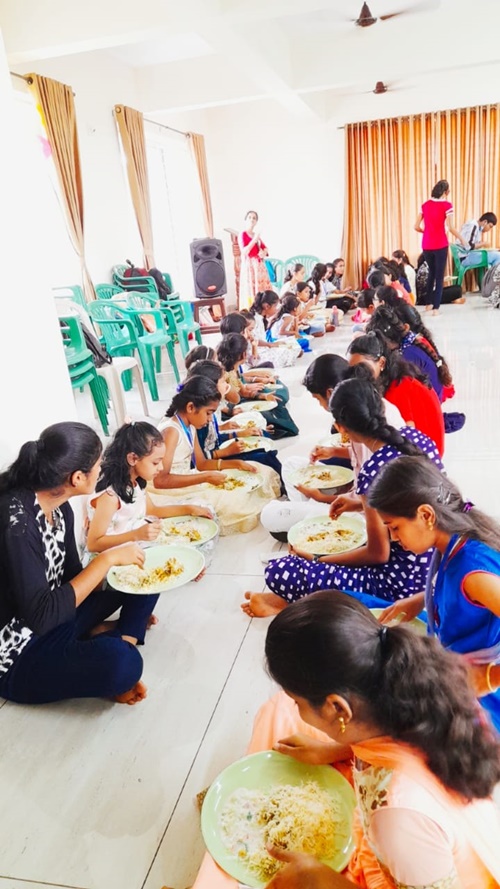 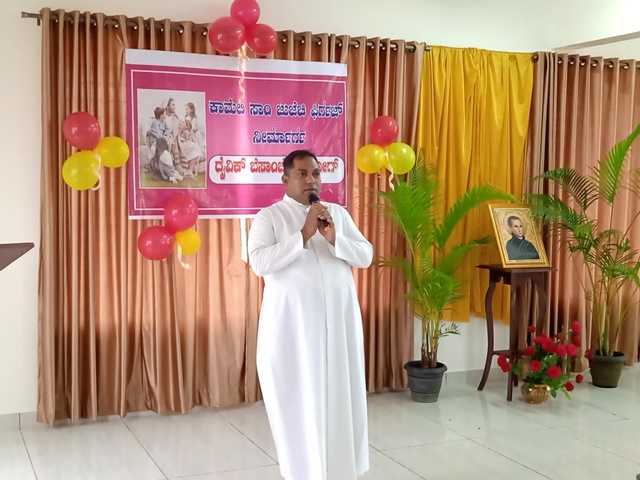 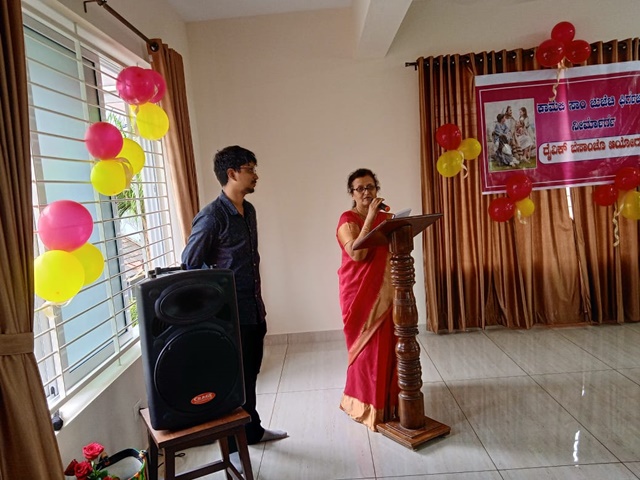 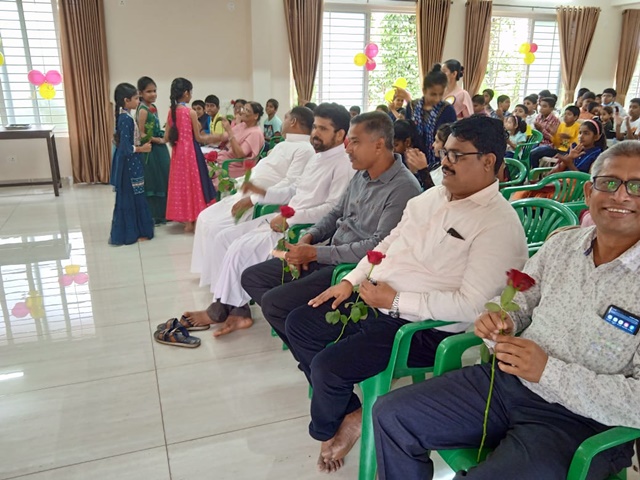 In his uplifting homily, Father Joswin D’Souza said, “In the journey of life one encounters all kinds of lives that give life to heroes or pro-lifers, those who have risen from misery to wealth, saved others in times of crisis and victims of death, disease and fought the battles of life and those who love others with unconditional love. It is not easy to be a role model, because it takes work, discipline and sacrifice. Choosing the narrow door, choosing the Lord, involves knowing him with our heart and mind, growing in our relationship with him so that he becomes a meaningful presence in our lives”. He further elucidated the life of Saint John Berchmans, the patron saint of altar servers, his three treasures – crucifix, rule book and rosary and his saying: “If I don’t become a saint when I am young, I will never become one” with tangible examples.

Shortly after Holy Mass, a significant program was organized in the parish auditorium. Fr Anil D’Mello, Fr Joswin D’Souza, Ravi Saldanha and Prakash Pereira, vice-president and secretary of the parish pastoral council, Sr Sujatha and Sister Mavis, respectively superiors of the Holy Cross convent and Carmel Ashram and Maurice Renjal – coordinator of 21 commissions were the dignitaries who graced the occasion.

Kenneth Lobo, who served as an altar boy to Pope Paul II during his pastoral visit to Jawaharlal Nehru Stadium in New Delhi for the solemn promulgation of the Post-Synodal Apostolic Exhortation, was present for the occasion.

Young boys and girls kept the rally glued to their seats with action songs. Father Anil D Mello, director of the Altar Boys and Marian Sodality, inspired everyone, with his wonderful words of thanks and invigoration. He focused his attention on “Mistakes are for growth,” “Accepting mistakes,” and being open to corrections from parents.