In June, psychologist Jordan Peterson signed with the Daily Wire, a self-proclaimed “center-right” media site, for which he has already recorded a plethora of video content. One of his most watched DailyWire+ videos so far is “Message to Christian Churches”. The video was inspired by her growing Christian fanbase, as well as her own spiritual quest.

A few years ago, a family friend in his late twenties explained why he didn’t want to go to mass with his family on Easter morning. “Priests make the Bible so boring,” he said. “I can’t help but fall asleep during their homilies. I would go to church if they played clips of Jordan Peterson talking about the Bible instead of asking the priest to give homilies. At least, Peterson makes the Bible relevant.”

Peterson’s psychological analyzes of Jungian archetypes found in the Bible largely ignore the metaphysical and ethical truths of the text. And yet, his appeal to young men was part of the reason Los Angeles Auxiliary Bishop Robert Barron gave him the example about how to engage “nones” (young people with no religious affiliation) at the U.S. Bishops’ Committee on Evangelism and Catechesis in June 2019. Shortly after, Barron appeared on Peterson’s podcast. Although many Catholics were skeptical of Barron engaging so closely with a figure who draws alt-right crowds, others praised him for opening the church doors to Peterson, who in the interview admitted that he had a desire for faith and admired the Catholic Church.

Peterson’s video barely captures the essential “message” of Christianity, and runs the risk of reducing it to something it is not.

I got stuck somewhere between these two “sides”. To Barron’s credit, he never indicated that he intended to use Peterson’s own work for evangelistic purposes. Rather, he wanted to encourage Catholic pastors and educators to engage in his work – despite its ideological nature and lack of complete congruence with a Catholic worldview – to understand the needs of young people, many of whom find Peterson’s videos appealing. . And I agree that it is much more effective to engage in charitable dialogue with people whose ideologies do not completely converge with the teachings of the church than to denigrate them, minimize the convergences and tell them why. they are wrong.

But if that’s the case, I’ve always wondered why Barron never engaged with Peterson’s counterparts on the left, perhaps the likes of U.S. Representative Alexandria Ocasio Cortez, philosopher Slavoj Zizek, or professor and author Ibram X. Kendi, whose leftist ideological rhetoric may not overlap neatly with orthodox Catholic teaching, but resonates strongly with many “nones” and indeed converges with Catholic principles in several respects. Barron’s videos condemning poststructuralist thinking, critical theory, and “woke ideology” seem to run counter to the evangelistic method he used to engage with ideologues of Peterson’s caliber.

Peterson’s video message to “Christian churches,” one of his first released after his partnership with Daily Wire, reflects some of the fruits of his dialogue with Barron. Already with over 1.2 million views (surprisingly only half the amount of his “Message to Muslims”), the video shows Peterson sitting in what one would assume to be a country house, complete with bookshelves and a stack of wooden logs in the background – matching his whole “disheveled intellectual” personality. Peterson squints into the teleprompter, as the screen periodically switches between camera angles in an attempt to hold the audience’s attention for 11 long minutes of Peterson’s pontification. He proceeds to fuse his signature Canadian accent with what appears to be his attempt to emulate the biting, pragmatic rhetorical style of his boss Ben Shapiro. 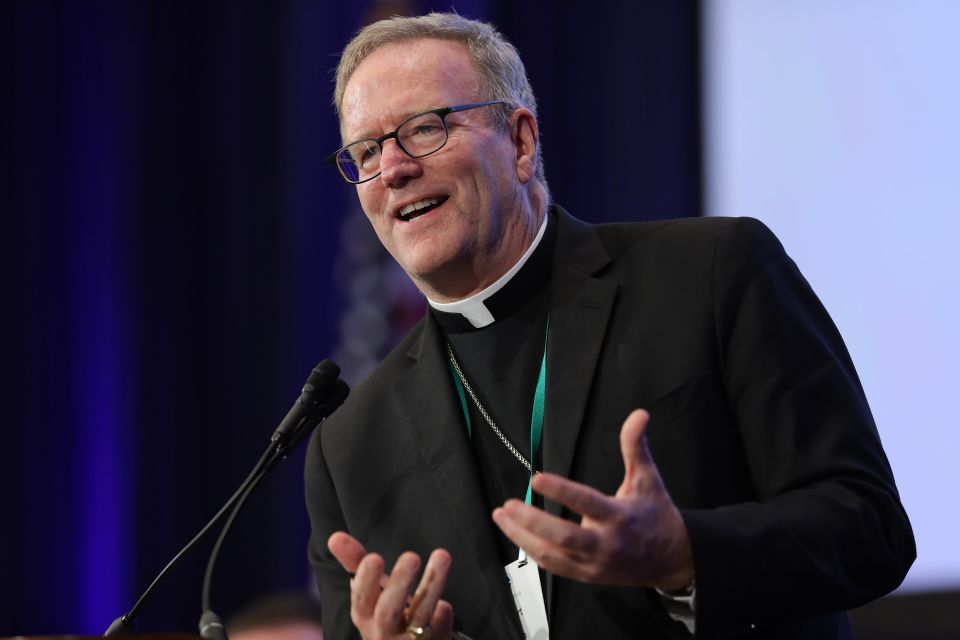 At the 2019 USCCB General Assembly, Auxiliary Bishop of Los Angeles Robert E. Barron suggested that Jordan Peterson’s message could bring people unaffiliated with the religion, or “not,” back into especially young people, to the Catholic Church. (SNC/Bob Roller)

His tirade takes aim at criticisms of toxic masculinity — nothing groundbreaking for those already familiar with Peterson’s videos — and praises “mainstream” notions of masculinity that uphold heroic virtue, channel instinctual aggression and a sense of purpose. stoic of duty to build civilization and defend his family. He sprinkles his rant with Daily Wire-isms like: “Wake up, sunshine!” “…that old prankster Derrida…” “In the words of that mass murderer Karl Marx…” Peterson’s overt ideological flair gives the video a performative edge that makes it almost fun and entertaining, albeit in an ironic way.

He goes on to tell “Christian churches” that they should uphold these masculine ideals and actively try to attract young men, going so far as to suggest that they put up billboards that read “Young Men Welcome Here!”

He encourages them not to put young men down for their “toxic” tendencies, but rather to productively sublimate them by asking for “more”. [and] recall[ing] them who they are… You are churches, for the love of God! Stop fighting for social justice, stop saving the fucking planet! Take care of some souls, that’s what you’re supposed to do, that’s your sacred duty. Do it NOW…before it’s too late.” 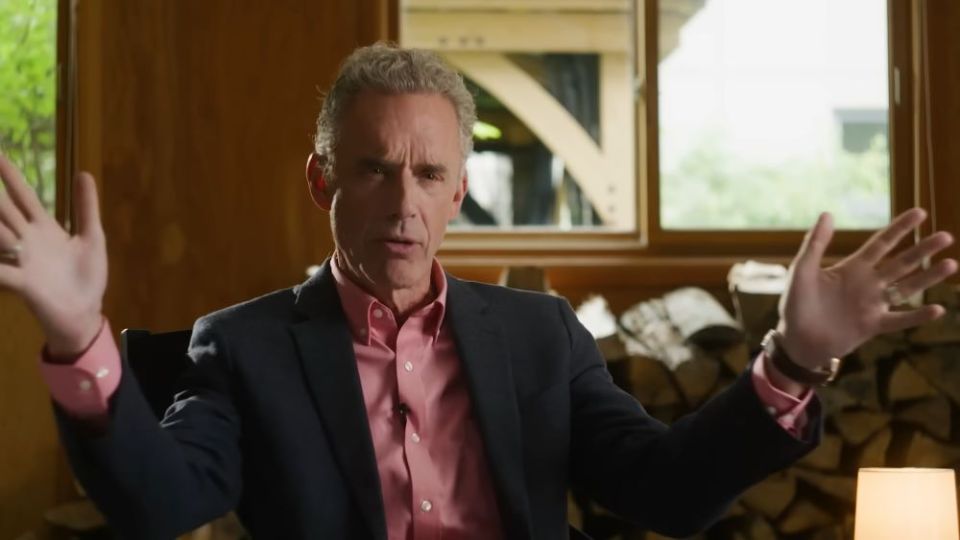 One of Jordan Peterson’s most popular DailyWire+ videos is “Message to Christian Churches”. In it, the Canadian psychologist tells “Christian churches” to respect “traditional” male ideals and put up billboards that read “Young Men Welcome Here!” (NCR/DailyWire+ screenshot)

Bearing in mind that Peterson tries to fit into the role of a hyperbolic performative shock jock like his Daily Wire peers, I’m inclined to take his “message” with a grain of salt. I have to admit that Peterson brings up some points that churches should consider (with a grain of salt). Like Peterson, I wonder if what often appears to be an attempt to “neutralize” men’s aggressive tendencies is as useful as harnessing, integrating, and transforming said tendencies to virtuous ends. I’ve noticed that most of my friends who look up to Peterson are working-class and people of color who see him as an alternative to a puritanical view of masculinity that’s more accommodating to college-educated bourgeois elites. seriously.

My main concern has more to do with Peterson’s reactionary posture, which obscures all the redeemable qualities of his message, which is the same problem faced by his Daily Wire colleagues such as Shapiro, Candace Owens and Matt Walsh. Not only does their posture make it difficult for people who disagree to engage with some of the valid points they can make, but his performative and extravagant flair makes it difficult to take them seriously.

My other concern is about the integrity of his message from a Christian perspective. Peterson’s emphasis on the value of channeling more “instinctive” manifestations of cis-typical male biology and psychology, and on the moral importance of faithfulness to one’s duties, is not necessarily “anti- Christian”. But these virtues in themselves are pagan if they are never transformed by the “Christian” theological virtues of faith, hope and charity.

It seems to me that Peterson misunderstands what is most essential in Christianity. It is not simply a set of moral teachings, ideas or beliefs. It is not an ideology that defends “traditional values”. It is an encounter with a Person, an experience of the love of God in the flesh. Certainly, Jesus himself (as well as the many male saints) embodied the natural masculine virtues that Peterson celebrates. But for Jesus, such virtues were not an end in themselves. Jesus did not die on the cross out of a sense of courage or manly duty, but out of a desire to give himself to humanity out of love.

The Christian notion of “male genius” highlights a particular “way of giving” (to use the words of Swiss theologian Hans Urs von Balthasar) that incorporates certain natural virtues, elevating them to the supernatural ideal to which we are all called: fatherhood and motherhood, which is ultimately a call to love creatively and to generate life.

Take Saint Joseph as an example. Hardly a “weak” or a “weak,” nor “toxic” and “aggressive,” St. Joseph was the ideal father because he bravely served and sacrificed for his wife and adopted son – not simply out of a moralistic sense of duty. duty, but in response to a supernatural call to love. The pinnacle of masculinity, as demonstrated by figures like Saint Joseph, is this kind of paternal love – the same for women, in a way that incorporates their unique gifts and virtues.

I agree that developing a sense of duty could be an important starting point for many men, especially those not growing up in stable environments. It can be a springboard to understanding God’s love for them and their supernatural calling. But let’s face it. Peterson’s video barely captures the essential “message” of Christianity, and runs the risk of reducing it to something it is not.

You don’t have to go to church to learn how to keep your duties and get your life in order. You can easily pick up a copy of a book by Marcus Aurelius, Nietzsche, Confucius, or a self-help book like Peterson’s 12 Rules for Life. For young men who want to understand the fullness of Christian virtue, I would recommend that they instead pick up a copy of Pope Francis’ Apostolic Letter Patris Corde (“With the Heart of a Father”) on the life of Saint Joseph.

Enter your email address to receive free newsletters from NCR.