On October 14, Tania Tetlow was officially inaugurated as Fordham’s 33rd President, making history as the first laywoman and first woman to lead the University.

Now, she says, it’s time for all of us to make history.

“As the clouds darken around the world, we come together on this bright, shining day to remember that Fordham has such power to make the world a better place.”

Draw inspiration from a providential past

The day began with a Mass at the University Church, during which Joseph M. O’Keefe, SJ, GSAS’ 81, Provincial of the Eastern Province of the United States of the Society of Jesus, confirmed Tetlow in her mission as director of the apostolic work of Fordham. The Mass was attended by Jesuits from across the province, including Fordham President Emeritus Joseph M. McShane, SJ, who received several rounds of applause throughout the day.

The festivities drew some 2,000 guests to the Rose Hill campus. In addition to family and friends from Tetlow, Fordham alumni, faculty, students, administrators and delegates from nearly 60 universities around the world were in attendance. The official ceremony on Keating Terrace was followed by a “Prez Fest” celebration on Edwards Parade and a concert featuring the Preservation Hall Jazz Band of New Orleans. The event concluded a week-long celebration that began with a talk on Tuesday about Fordham’s place in the world.

In a rousing call to arms to harness the University’s resources to change the world, Tetlow tied his vision for the University’s future directly to the past, citing the founding of Fordham by Archbishop John Hughes ago 181 years old.

“In 1841, Archbishop John Hughes fought to serve the hundreds of thousands of immigrants who poured into New York, so desperate and so determined. He organized food and shelter for them, but he also recognized their deeper hunger for education and opportunity,” she said.

“Hughes founded a college there and called it St. John’s. He did it as an act of hope, because he could see the talent and potential in these desperate people coming down from the ships.

That she would end up leading this college — now a global university — is almost kismet, she said, noting how her father and mother met on the Rose Hill campus as graduate students. His father, who had been a Jesuit priest for 17 years, made the “agonizing decision” to leave the Society of Jesus to marry his mother and raise Tetlow and his two sisters. Her uncle Joe, who is 92 and watched the ceremony live, is a Jesuit priest and prolific author. Tetlow said she grew up thinking of all Jesuits as uncles.

“I like to think [my father] made the right choice, but anyway, I hope I caught up with the Jesuits,” she said with a laugh.

Today, she says, it is more necessary than ever to take a stand for both faith and reason, as the Jesuits have always done. Education does not dilute faith, she says, it feeds it.

“In the Catholic tradition there are many models of service, including kindness rooted in purity, in monastic isolation from the wicked world. better world,” she said.

“It often caused them a lot of trouble. Sometimes it was because of missteps, but more often it was because the world preferred not to remember the clear lessons of the gospels. As my dad used to say, ‘They’d rather think Jesus was joking.'”

“My dream for Fordham is that we use our resources – especially the genius and creativity of our employees – to have even greater impact, always starting in our own community here in the Bronx and expanding outward. .” 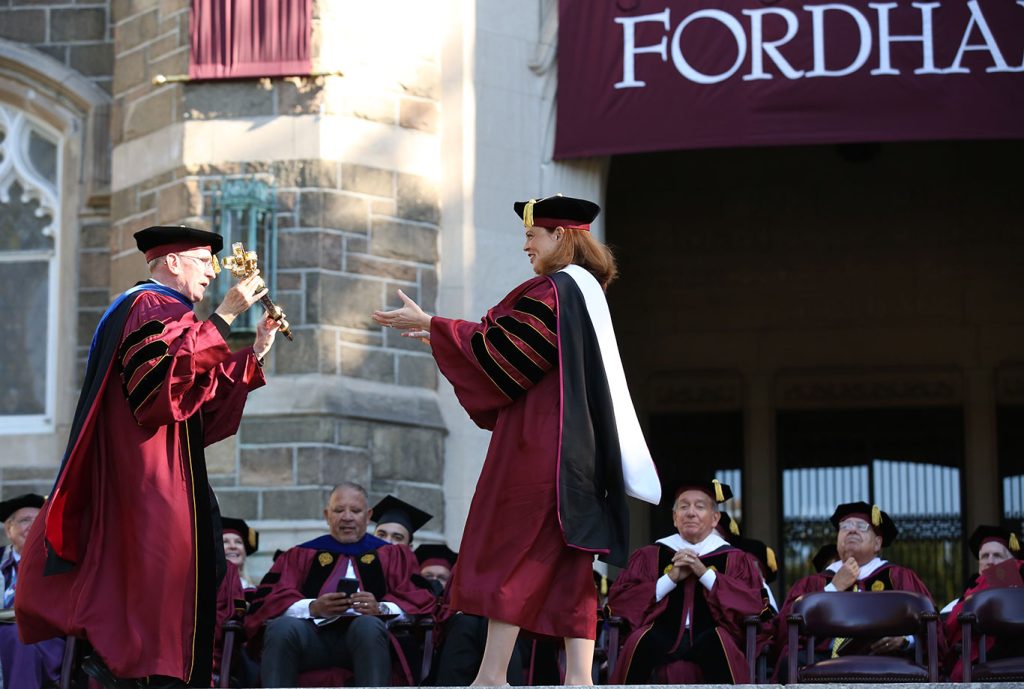 From NOLA to NYC, testimonials abound

The program featured speeches from a wide range of dignitaries. Cardinal Timothy Dolan, Archbishop of New York, delivered the invocation, and Senate Majority Leader Charles Schumer extended thanks to Father McShane and best wishes to Tetlow.

Marc Morial, president and CEO of the National Urban League and former mayor of New Orleans, shared memories of her relationship with Tetlow, which she began when she walked into his campaign headquarters at the age of 18. He called it “a real magnolia of steel”.

“She has this incredible humility, this charm, but this belly of strength and determination,” he said.

“She’ll smile, she’ll listen to you, she’ll nod her head. But make no mistake; it processes every word.

Thomas B. Curran, SJ, president emeritus of Rockhurst University, shared his experience working with her as a member of the board of trustees at Loyola University, where she was president before coming to Fordham.

“Very soon, if you haven’t already, you will find out what I learned about Tania Tetlow. It’s a privilege to know her, it’s a gift to work with her and it’s a great blessing to learn from her,” he said.

“With Tania, we are called to be collaborators. This will bring us to the end for which we were created and will help bring forth the greater glory of God.

Robert Daleo, GABELLI ’72, Chairman of the Board of Trustees of Fordham University, praised Tetlow as “eminently qualified – by temperament, experience and ability – to lead Fordham at this inflection point of the higher education and in the political and cultural life of our nation.

John Drummond, Ph.D., Southwell Professor Emeritus of Philosophy and Humanities at Fordham, brought greetings on behalf of the university’s faculty, while Linda LoSchiavo, TMC ’72, Director of University Libraries, welcomed Tetlow on behalf of the directors and staff. .

Pulatani said she was excited to see how Tetlow “will lead us through a new era of strong unity in which the voice of every Fordham student is heard, listened to and valued”.

“We are inspired by the pioneer that is President Tetlow, showing the world that women still have a place in the place of decision-making,” she said.

“Her presidency will undeniably become a turning point for the women of Fordham University and the prosperous future they will have.” 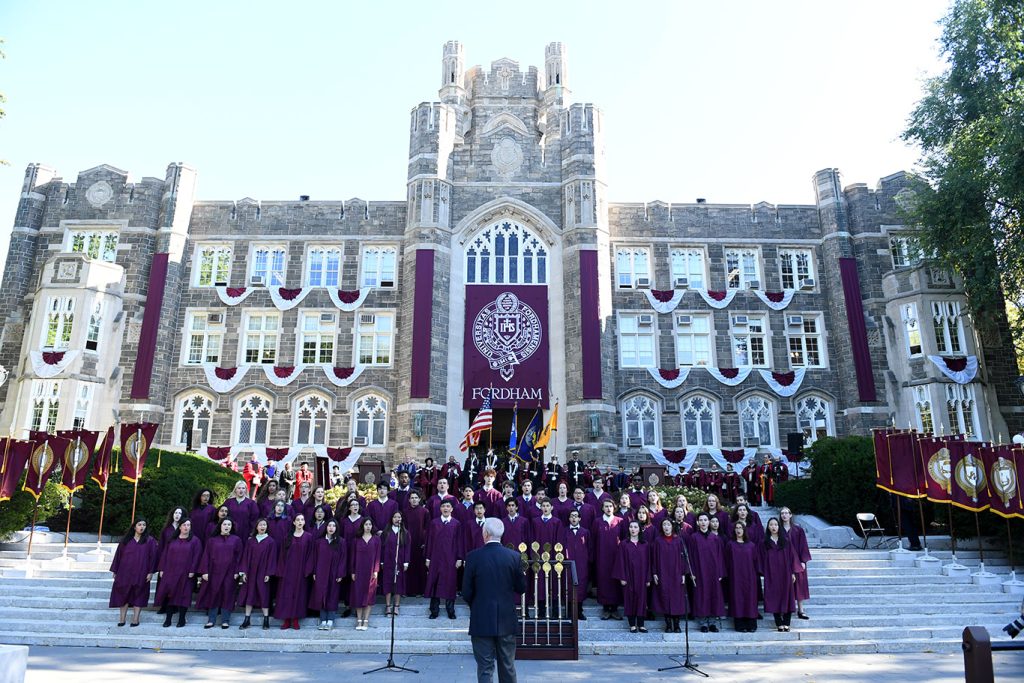 Good wishes from here and elsewhere

David Wilkins knew Tetlow had something special almost from the time he met her when she was a student at Harvard Law School.

“I had Tania as a student on her very first day of law school, and it didn’t take very long before it was very clear that she truly was an amazing person,” Wilkins said, who is the law professor Lester Kissel at Harvard. Faculty of Law. “She was a brilliant student – at Harvard we have a lot of brilliant students – but she was clearly an extraordinary person.”

Wilkins said what makes Tetlow so special is how it embeds its values ​​and principles in everything it does.

“She had a wonderful mind that likes to think about problems and solve them, but always with a generosity of spirit,” he said. “When she got into the law and legal issues, it was never just, ‘How can I make my team win?’ or ‘How can I make the most complicated argument that makes me look really smart?’ It was always about: ‘How can we use the law as a tool to solve problems?’ »

Wilkins said Tetlow is someone who was “born to help bridge these divides” the country is facing at this moment in history.

“I think those are the greatest qualities you can have as a college president — to be an empathetic listener and to be a creative problem solver,” he said.

Dance with the students during the evening concert

Fordham students Alessandra Carino and Sean Power said they were delighted to be part of the inauguration festivities as it was a historic day for the university.

“I’m very excited about President Tetlow,” said Carino, a senior at Fordham College in Rose Hill and president of the Commuting Students Association. “I think her perspective as a woman, as a secular person, is really important. I think his lived experience will make a difference [way of] problem solving or simply a different perspective than the University has seen.

Power said he hoped she would help maintain Jesuit values ​​at Fordham as she ushers in a new phase.

“President Tetlow, she has as much Jesuit background as possible without being a Jesuit, so I’m really glad Fordham is maintaining that even with a layman as president,” he said.

“It’s really great to see the legacy transition from Father McShane to President Tetlow,” she said.

De la Fuente said she’s seen firsthand the impact Father McShane has had in making Fordham a more national name, but said she’s excited to see where the University can go next, especially internationally. She works with students applying to schools in the United States, and “it’s sort of the first wave of Fordham being something I hear from students telling us about, so I want to see that momentum continue.”

For Jennifer Avegno and her family, the purpose of the trip to Fordham was twofold – her daughters decided to tour the University as prospective students, and she was lucky enough to see her friend be inaugurated as a Fordham’s new president.

“She is such a wonderful and complete leader – compassionate, intelligent, thoughtful and spiritual. She really is the whole package,” Avegno said. “Loyola was so lucky to have him. Fordham is really lucky.

Avegno said she has seen first hand what Tetlow has brought to Loyola New Orleans and she is excited to see what she will do at Fordham in the heart of New York.

“Is New York ready for his, I think that’s the question,” Avegno said with a smile.