ROME — The eighteenth meeting of the Joint International Commission for Theological Dialogue between the Catholic Church and the Eastern Orthodox Churches was held in Rome from June 20-24, 2022 and was hosted by the Dicastery for the Promotion of unity of Christians. It was jointly presided over by His Eminence Cardinal Kurt Koch, Prefect of the Dicastery for Promoting Christian Unity, and His Grace Msgr. Kyrillos, Coptic Orthodox Auxiliary Bishop of the Diocese of Los Angeles, California, USA.

The two delegations met separately on the morning of June 20. Plenary sessions were held from the afternoon of June 20 to June 24, each day beginning with a brief prayer service based on material prepared for the Week of Prayer for Christian Unity.

On the evening of Monday, June 20, Cardinal Koch hosted a dinner for the members of the dialogue at Casina Pio IV in the Vatican Gardens. On the evening of Wednesday, June 22, members attended Vespers at the Benedictine Collegio di Sant’Anselmo at the kind invitation of Most Reverend Gregory Polan, OSB, Abbot Primate of the Benedictine Confederation, and shared a dinner with the community.

On Thursday June 23 at 12 p.m., His Holiness Pope Francis received the members of the Commission in private audience. His Grace Archbishop Kyrillos presented to His Holiness the Commission’s full statement, “The Sacraments in the Life of the Church”, and related that the Commission is beginning a new phase of reflections on the Mother of God. Bishop Kyrillos then presented Pope Francis with a Coptic icon representing Saint Cyril of Alexandria and Pope Celestine of Rome, recalling the cordial relations between the Churches of Alexandria and Rome at the time of the Ecumenical Council of Ephesus. 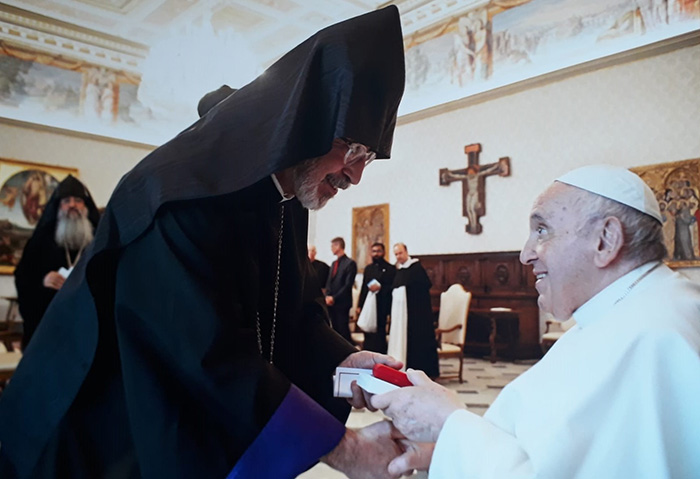 In his address, Pope Francis underlined that this document “could mark a new step forward towards full communion”. This leads him to three important dimensions of ecumenical dialogue: baptismal, pastoral and local. “It is in baptism that we find the foundation of communion among Christians and our aspiration to full visible unity,” the pope said. “Secondly, ecumenism always has a pastoral character (…) the broad consensus noted by your Commission, not only on baptism but also on the other sacraments, should encourage us to develop more fully a pastoral ecumenism”. His Holiness referred to the already existing pastoral agreements and asked: “Wouldn’t it be possible to extend and multiply such pastoral agreements, especially in situations where our faithful are a minority or in the diaspora? Finally, he underlined that ecumenism already exists as the first local reality. “The dialogue of life in the local and daily relations between our Churches (…) constitutes a real place or source of theology.

The plenary session then began its final examination of the draft document “The Sacraments in the Life of the Church”. This process continued until the morning of Wednesday 22 June. The text received unanimous approval and was signed by the co-chairs on Thursday 23 June. After the signing, Bishop Kyrillos presented Cardinal Koch with an icon of the Mother of God for the Dicastery. .

True to the theme, Aspects of Mariology, The Blessed Virgin Mary in the Teaching and Life of the Church, the following papers were presented: Malpan Dr. Mathew Vellanickal, “Mary in the Biblical Tradition”; Rev. Mark Sheridan, OSB, “The Tradition of the Dormition and Assumption in the Teachings of the Catholic Church”; and Bishop Kyrillos, “The Understanding of the Dormition of the Blessed Virgin Mary in the Eastern Orthodox Tradition”.

This study and discussion will continue at the next meeting, which will take place at the Logos Center of Saint Bishoy Monastery, Egypt, from January 31 to February 4, 2023, with arrivals on Monday January 30 and departures on Sunday February 5.