Armenian Genocide Remembrance Day has acquired the magical power to connect all Armenians around the world, physically, virtually and spiritually. A vibrant and rapidly growing Armenian community celebrated the 107and anniversary of the Armenian Genocide on April 24, 2022, at St. Garabed Armenian Apostolic Church of the Desert in Rancho Mirage, California.

Thank you to dedicated and visionary leaders, generous donors and hard-working community members. The Armenian Apostolic Church of St Garabed, with its impressive complex, comprising the inspiring sanctuary, the elegant social hall and the rapidly growing enthusiastic community, is recognized as the “jewel in the crown of the desert”.

After an inspiring church service, parishioners and guests gathered at the Ron Krajian Social Hall for a luncheon which was followed by the 107and Anniversary Genocide Remembrance Day Remembrance Day celebration.

Reverend Deacon Gevork Gevorkian’s opening prayer, Aida Askejian, President of the Ladies Society, welcomed the guests and announced that proceeds from the luncheon will go to the Etchmiadzin Children’s Fund. Parish Council Chairman Vartan Nazirian warmly welcomed the guests and expressed his gratitude to the church community for their unwavering commitment, enthusiasm and support. He then introduced the members of the parish council.

The program began with a beautiful rendition of three Armenian songs played on Duduk by Deacon David Gevorkian.

The first speaker, Dr. Silva S. Karayan, professor emeritus at California Lutheran University, is the granddaughter of Der Nerses Avak Kahana Babayan, a genocide survivor and dedicated leader, who stayed with his flock through three deportations until Armenians from Aintab settle safely in Aleppo

Dr Karayan reassured the audience that we will all continue to meet each year, on the 24and of April, for remembrance and reflection, for appreciation and inspiration, and for solidarity and empowerment. We should do so with a firm resolve to continue to live and prosper as proud, productive, and loyal Armenian American citizens. 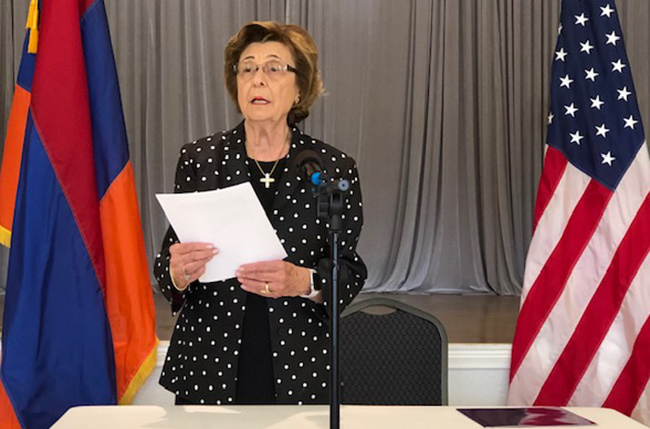 The second speaker was Dr. Garabet Moumjian, an independent historian, security researcher and consultant, and linguist specializing in the Middle East. He is also Arabist and Ottomanist.

The 107and The anniversary of the celebration of the Armenian Genocide was a remarkable event, both impressive and stimulating, which the rapidly growing parish of the Armenian Church of St. Garabed of the Desert will long remember, thanks to the tireless efforts of the parish council and the Society of Ladies.