JERUSALEM (AP) — The three Christian communities that have anxiously shared their holiest site for centuries are embarking on a large-scale project to restore the ancient stone floor of the Jerusalem Basilica.

The project includes an excavation that could shed light on the rich history of the Church of the Holy Sepulcher in the Old City, built on the site where Christians believe Jesus was crucified, died and rose again, the central event of faith celebrated each spring. at Easter.

It marks a further improvement in the ties between the Catholic, Greek Orthodox and Armenian Apostolic Churches. In the past, they came to blows on the site, which they share according to a delicate layout dating from the middle of the 19th century. Three other denominations also have clearly defined access to the church.

“The cooperation between the three communities is the most important thing,” said Reverend Francesco Patton, head of the Catholic Franciscan order dedicated to the preservation of Christian sites in the Holy Land. “It shows the whole world that it is possible between Christians of different churches and communities to have a brotherly relationship”.

The three communities came together in 2016 to restore the Holy Aedicule on the site where Jesus is believed to have been buried in a cave tomb – the first large-scale renovation since cleaning up after a fire in 1808.

A member of the restoration team works on the floor of the Church of the Holy Sepulchre, where many Christians believe Jesus was crucified, buried and raised from the dead, in Jerusalem’s Old City, Thursday, March 17, 2022 (AP Photo/Mahmoud Illéan)

The renovation of the Edicule has highlighted the need for further repairs to the floor of the basilica, which includes stones from the time of the Crusaders in the 12th century, recent additions from the 19th century and patches of concrete and mortar, forming part of earlier and rougher renovations. . The 1,200 square meter (13,000 square foot) floor will be repaired in phases to allow liturgical services and visitation to continue.

Sewer and electricity lines running under the church, which is nestled in the heart of Jerusalem’s densely populated Old City, will also be repaired.

The project is led by Osama Hamdan, a Palestinian Muslim architect from Jerusalem who has worked on the conservation of Jewish, Christian and Muslim sites across the Holy Land. He said it is a great honor to work at the church, which he considers part of his own cultural heritage.

At a ceremony marking the start of the project, the Greek Patriarch of Jerusalem, Theophilus III, acknowledged that it was a “difficult time for humanity”, with war raging in Ukraine and instability elsewhere.

“As we care for this holy place and restore it, we are part of the message of hope that emanates from the holy tomb not only for Christians, but also for people of good will around the world,” he said. declared. 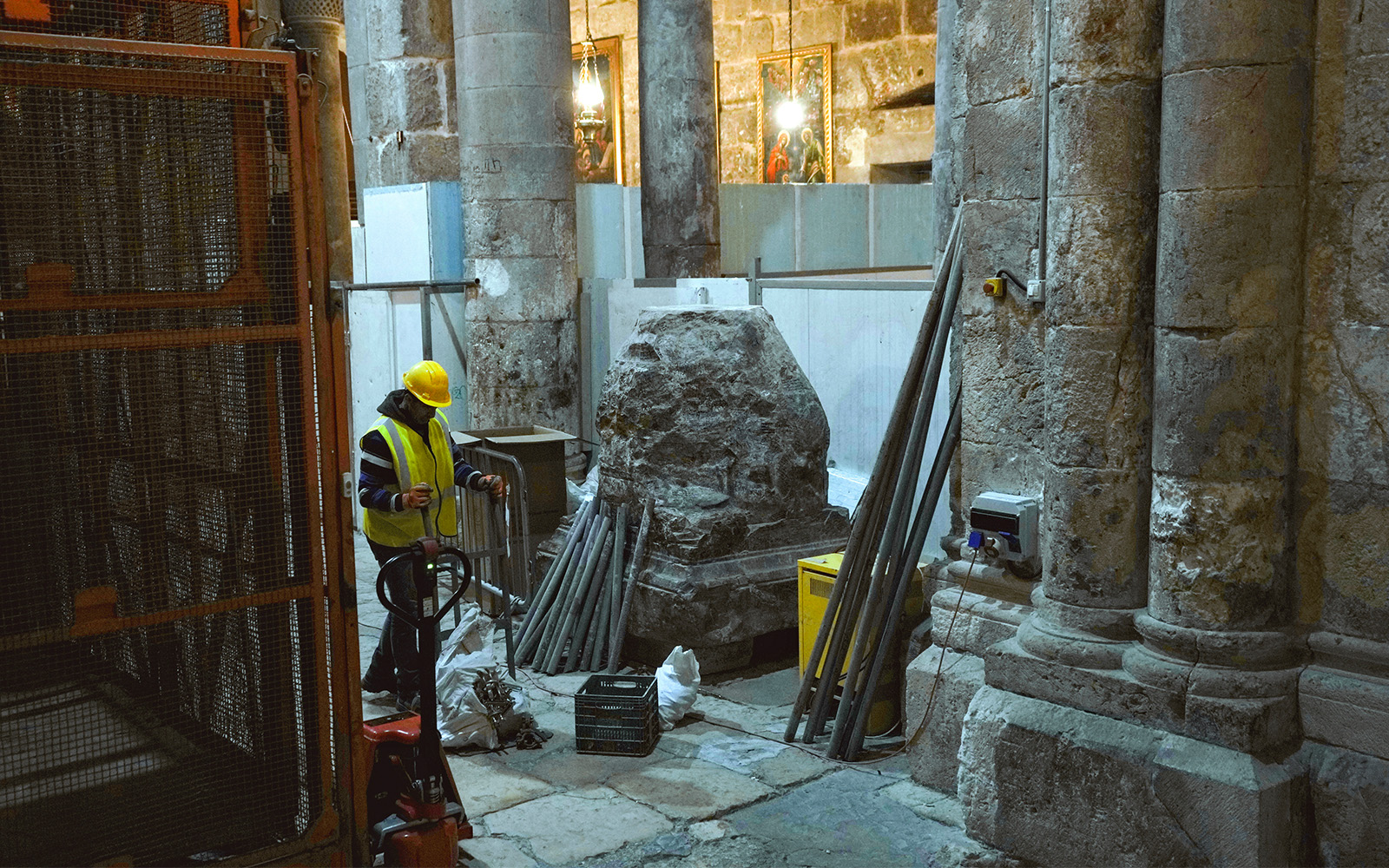 A member of the restoration team works on the floor of the Church of the Holy Sepulchre, where many Christians believe Jesus was crucified, buried and raised from the dead, in Jerusalem’s Old City, Thursday, March 17, 2022 (AP Photo/Mahmoud Illéan)

After a preliminary survey conducted over the past two years when the church was largely empty due to the coronavirus pandemic, work began this month. The $11 million renovation project will be funded by donations and is expected to be completed in May 2024, according to what archaeologists will find.

The archaeological work will be undertaken by experts from La Sapienza University in Rome in coordination with the Franciscan Faculty of Biblical Sciences and Archeology in Jerusalem.

“When you do archaeological digs, you always expect a surprise,” Patton said.

Christian tradition holds that Jesus was crucified by the Romans just outside the city walls as they stood 2,000 years ago, and was buried in a cave tomb nearby. The Romans persecuted the early Christian community and Emperor Hadrian built pagan temples on the site.

After Emperor Constantine embraced Christianity in the 4th century, his mother, Helena, traveled to the Holy Land to identify sites related to Jesus and commissioned monumental churches, including a sprawling basilica on the traditional site of the crucifixion and burial. 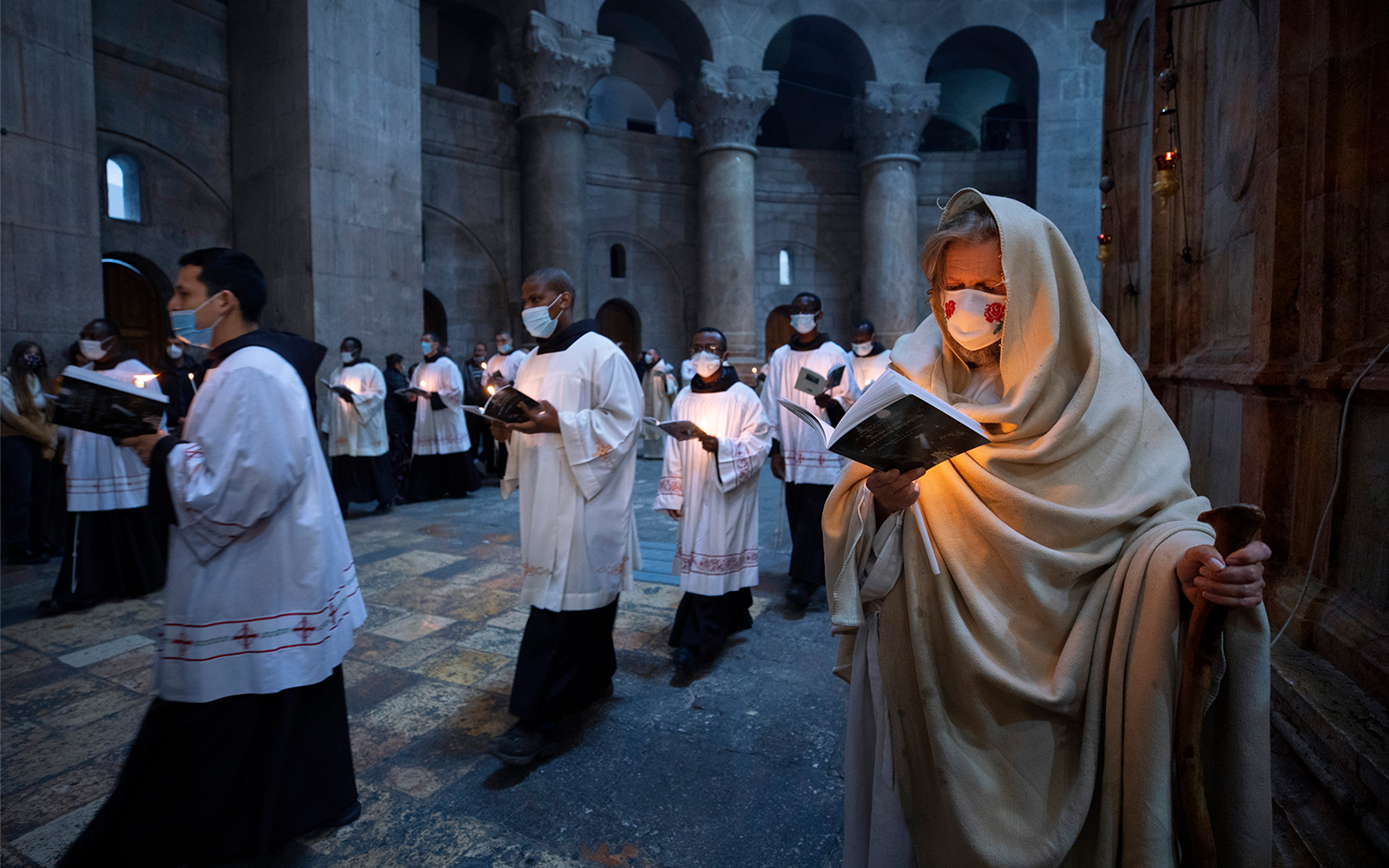 Priests surround the Edicule during Easter Sunday Mass led by the Latin Patriarch at the Church of the Holy Sepulcher in Jerusalem’s Old City, April 4, 2021. (AP Photo/Oded Balilty)

This structure was burned down by Persian invaders in 614 and destroyed again in 1009 by the psychopathic Caliph al-Hakim, who persecuted Jews, Christians and even other Muslims. A 12th century restoration by the Crusaders gave the Church of the Holy Sepulcher its current appearance.

Since 1852, the site has been governed by a rigid power-sharing arrangement between different Christian denominations known as the “status quo”. A Muslim family has been entrusted with the keys to the church for at least 800 years.

As part of this arrangement, the various denominations undertook small renovations to the chapels under their control, but collective action to maintain the shared areas often proved elusive. A wake-up call came in 2015, when Israeli authorities briefly closed the Edicule, deeming it unsafe.

Interfaith relations have steadily improved since then, even as the Israeli-Palestinian conflict and other regional disputes remain as intractable as ever. The restoration work itself seems to have helped the different churches to patch up their differences.

“Dialogue is really facilitated when you do something with others,” Patton said. “Working together is something that helps people get to know each other and start a process of trust.”

You are a dedicated reader

We’re really glad you read X Articles from The Times of Israel over the past month.

That’s why we started The Times of Israel ten years ago – to provide discerning readers like you with must-read coverage of Israel and the Jewish world.

So now we have a request. Unlike other media, we don’t have a paywall in place. But since the journalism we do is expensive, we invite readers to whom The Times of Israel has become important to help support our work by joining The Times of Israel community.

For just $6 a month, you can help support our quality journalism while benefiting from The Times of Israel WITHOUT ADVERTISINGas well as access Exclusive Content only available to members of the Times of Israel community.

Thank you,
David Horovitz, founding editor of The Times of Israel

Already a member? Log in to stop seeing this