One aspect of historical analysis is determining authorship. When it comes to fatherhood, there are two predominant ways of thinking. The first is that the author is the apostle John, or John son of Zebedee, as he is known in the scriptures. The other is that the author was part of the Johannine school of thought and was a member of the Johannine community who wrote in the spirit of John. What we can do is compare the writing of the Gospel of John and the Johannine Epistles to find similarities. When these books are read, the reader will notice a great similarity in language, tone, and the way words are used. The similarities are so great that there is an 86% match in how the words are used.

1 John and the early Church

The idea that John the Apostle was its author remained unchallenged until the 20th century. The early tradition of the Christian church identifies John as the author. Theological heavyweights such as Irenaeus, Tertullian and Dionysius of Alexandria say the author John the Apostle of Christ. In his great work entitled Against heresies, says Irenaeus, speaks of John testifying in his epistle to the things he witnessed. The annotation of the authorship of Dionysus is recorded by the great early church historian Eusebius. Tertullian has an interesting reason why the apostle John is the author of 1 John. Although Tertullian gives many reasons, he explains that the knowledge of Christ’s humanity and divinity is expressed through what John saw in the transfiguration. These pieces of evidence are called external evidence. They are so called because they occur outside of the epistle of 1 John. What does the internal evidence tell us about paternity?

Internal evidence is evidence that we can see in the sacred text itself. 1 John is unique in that it does not follow the standard greeting that was common at the time. This absence of a standard salutation has led some to assume that it is a sermon or a homily. The author does not identify himself by name, but he is an individual as evidenced by several references to himself in the singular.

The author also writes with authority and is seen throughout the letter. It is a virtue of his apostolic authority. There is a common chiastic pattern between the Gospel of John and the Epistles which would also be related to John the Apostle. This is most attested by 1:1 where the author claims to be an eyewitness. 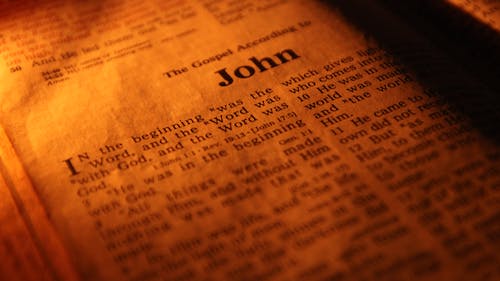 Why did John write 1 John? There is no single audience in mind as seen with the apostle Paul and Galatians, but it is meant for a group of churches that are similarly challenged. There is speculation that the seven churches listed in Revelation were the intended audience, but the evidence does not really support this hypothesis. The likely audiences were the churches around Ephesus in Asia Minor.

Ephesus in modern Turkey is where John resided towards the end of his life. It was the capital of Asia Minor, was a center of commerce and the Roman proconsul and there is plenty of evidence to place John there. Papias and Polycarp were the first to use the letter in their own writings. They were located near Ephesus, and they were also disciples of the apostle. The early church tradition in the writing of Irenaeus, Justin Martyr and Polycrates and also places the apostle in Ephesus.

What heresy was discussed in 1 John?

What John was talking about in the churches is another area of ​​debate. There are three ideologies that are in contention for the heresy described. One is a heresy known as Cerinthianism. This ideology comes from a character in the early church named Cerinthus and is said to be taught by one of the disciples. Cerinthus denied certain aspects of the flesh of Christ, especially after the resurrection, and he might have been an early proponent of adoptionism.

Another heresy that some say John was talking about was Gnosticism. We know from history that this movement was gaining momentum in Asia Minor. Gnosticism was able to lock itself into the Christian message, so it was easy for someone with little knowledge to fall victim to it. It’s an interesting belief system that basically teaches that matter is evil and that only those who have the secret knowledge will be saved. Since all matter is bad, it is impossible for incarnation to be possible.

The third candidate for John’s opponents are the so-called docetes. Some call them proto-gnostics because some of their beliefs were popularized and propagated by the gnostics. This group takes its name from the Greek word dokein which means “to appear” or “to seem”. In their opinion, Christ only appeared to be human, but he really was not. Docetism is part of what was to become Gnosticism and therefore the question that John addressed to his audience.

This historical analysis tells us who wrote 1 John, who the audience was, the opponents/occasion, and the general location. Understanding these things is essential to interpreting 1 John. John was an eyewitness to Jesus and walked, talked and saw him die on the cross. He gives eyewitness testimony to his humanity and divinity. The letter was written to a group of churches in Asia Minor who were facing the challenge of Docetism. John wrote to reassure the church that the Jesus he preached to them, using his apostolic testimony, is the real Jesus and therefore the real faith.

I was recently interviewed by Gary Michuta on his radio show Hands on Apologetics which airs daily on Virgin Most Powerful Radio. Here is our discussion of 1 John.